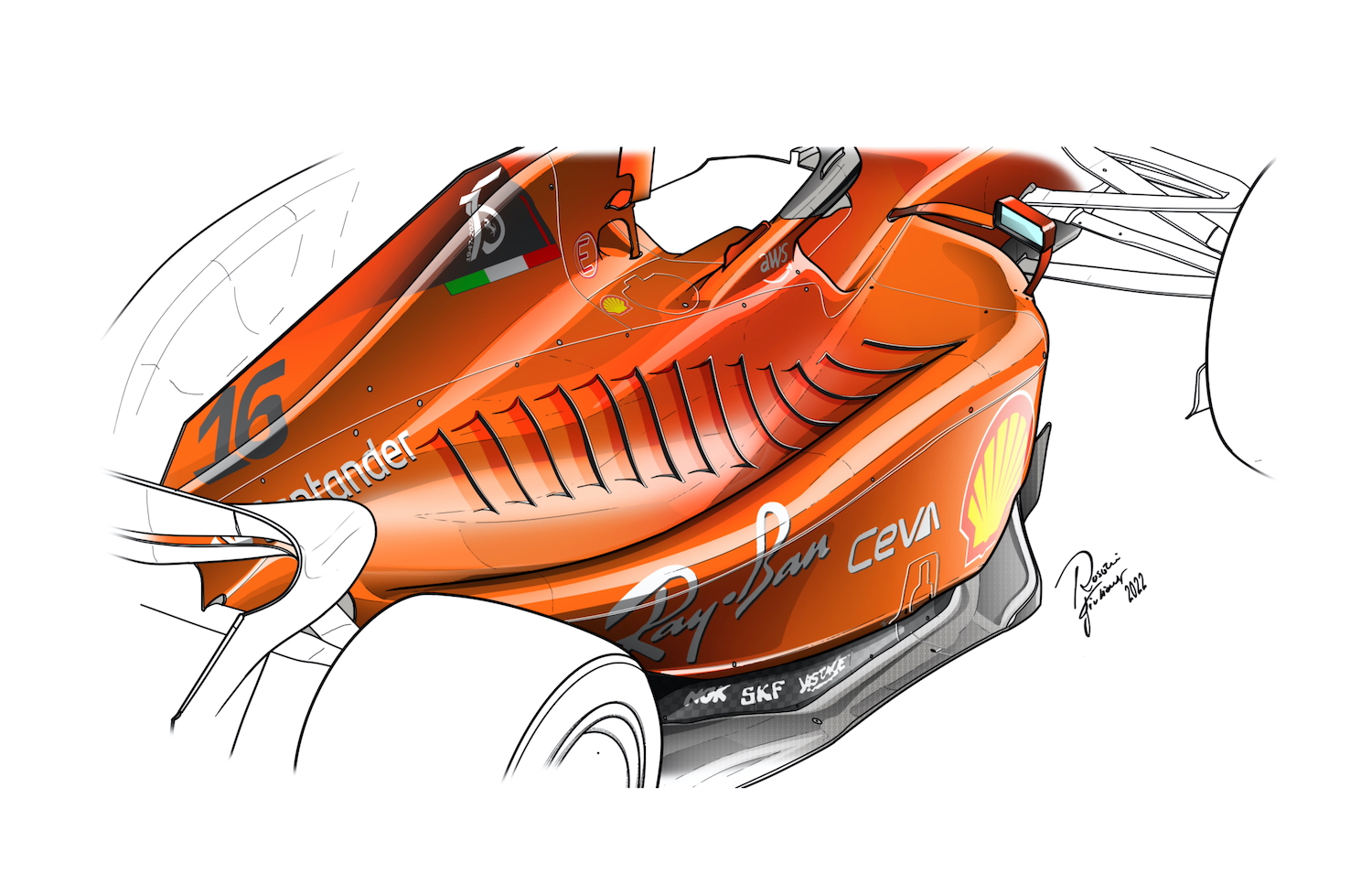 Pre-season testing has disproved some of our fears that the 2022 cars will all look the same, in fact the new technical rules have allowed a lot of design freedom and that’s pretty obvious when you look at the different sidepod solutions up and down on the grid.

But Barcelona and now Bahrain have given us a glimpse of the creativity of engineers and designers in their interpretation of regulations, which is certainly a very positive aspect for those wishing to explore the technical inner workings of a car.

If we analyze the different aerodynamic choices of the different teams, it is clear that the biggest difference in the management of the air flow mainly concerns the whole part of the car which is above the venturi floor. In fact, the technical regulations have left enough freedom with regard to the sides, which in some single-seaters present a clear deviation from the aerodynamics of 2021.

The first big difference can be seen among the single-seaters which have retained the down-wash effect; adopting much the same aerodynamic philosophy present in 2021, compared to those who, on the contrary, want to radically change this direction.

Ferrari and Aston Martin have indeed chosen to keep the sides of the body quite high, channeling the airflow higher towards the rear. The lower area of ​​the AMR22 sidepods (above) acts as a corridor for airflow, while Ferrari surprised many with its innovative and completely unconventional body choice (below).

We could observe on the F1-75 a pronounced gutter at the level of the cooling openings, with the aim of guiding the flow towards the wing of the beam.

Compared to the philosophy of Aston Martin, Ferrari did not provide a channel above the ground with its very square shape. From the images we observed during the disassembly of the F1-75 by the mechanics, we saw that this choice did not concern a particular arrangement of the radiators, nor other mechanical dimensions.

Team boss Mattia Binotto himself said that this choice was motivated solely by aerodynamic reasons and leaves room for changes in case it becomes necessary to tighten the sides in the lower part. We also saw a similar interpretation on the Alfa Romeo and especially on the Haas, which both chose the high sidewall philosophy.

Among the teams that use the Mercedes Power Unit, Aston Martin is the only one to have offered the highest form. Mercedes, McLaren and Williams have taken the route most faithful to that of 2021, which through the coanda effect creates a kind of chute to bring a portion of air to the upper part of the diffuser. 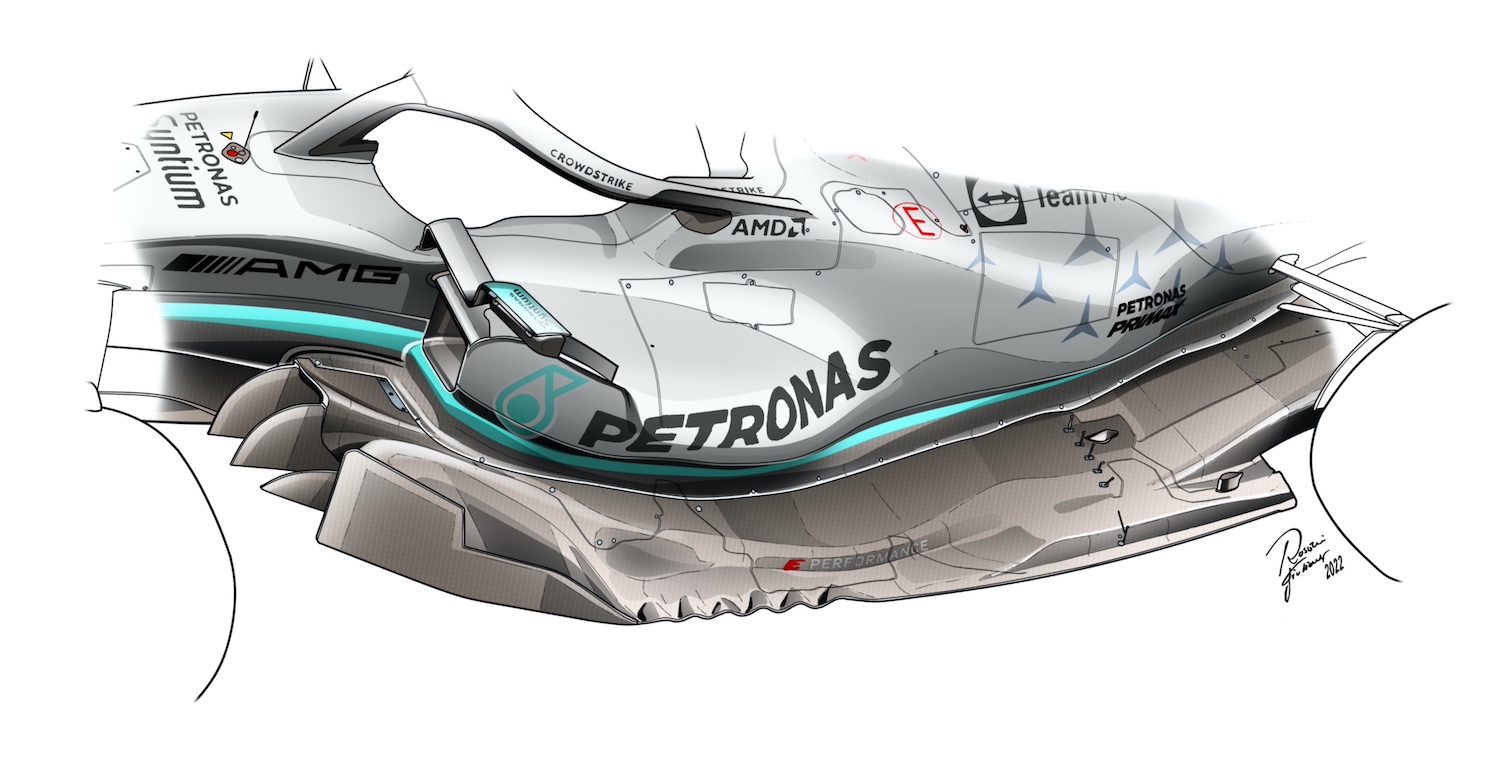 The Mercedes engine has been the one that seems to offer the least amount of space for years, as it remains very compact in the exhaust area, allowing for a very slender design. The Mercedes W13 was the one with the fewest differences in the lateral area compared to 2021 when it debuted in Spain (above). In Bahrain, however, the team introduced a major upgrade package similar to a “B-spec” version (below), with some truly extreme sidepods. The sidepods are very narrow and the protective structure has been separated and serves as a support for the mirrors.

This caused a lot of discussion, because according to the regulations, the safety supports cannot have direct aerodynamic functions. The support that surrounds the protective cone (under the mirror) has a wing shape, which contributes to generating the downwash towards the sides. The inlet for the radiators is also new, with a vertical shape. The corrugated floorboard has also disappeared and been replaced by a straight version to work in synergy with the new bodywork as teams look to seal their floors as best they can. 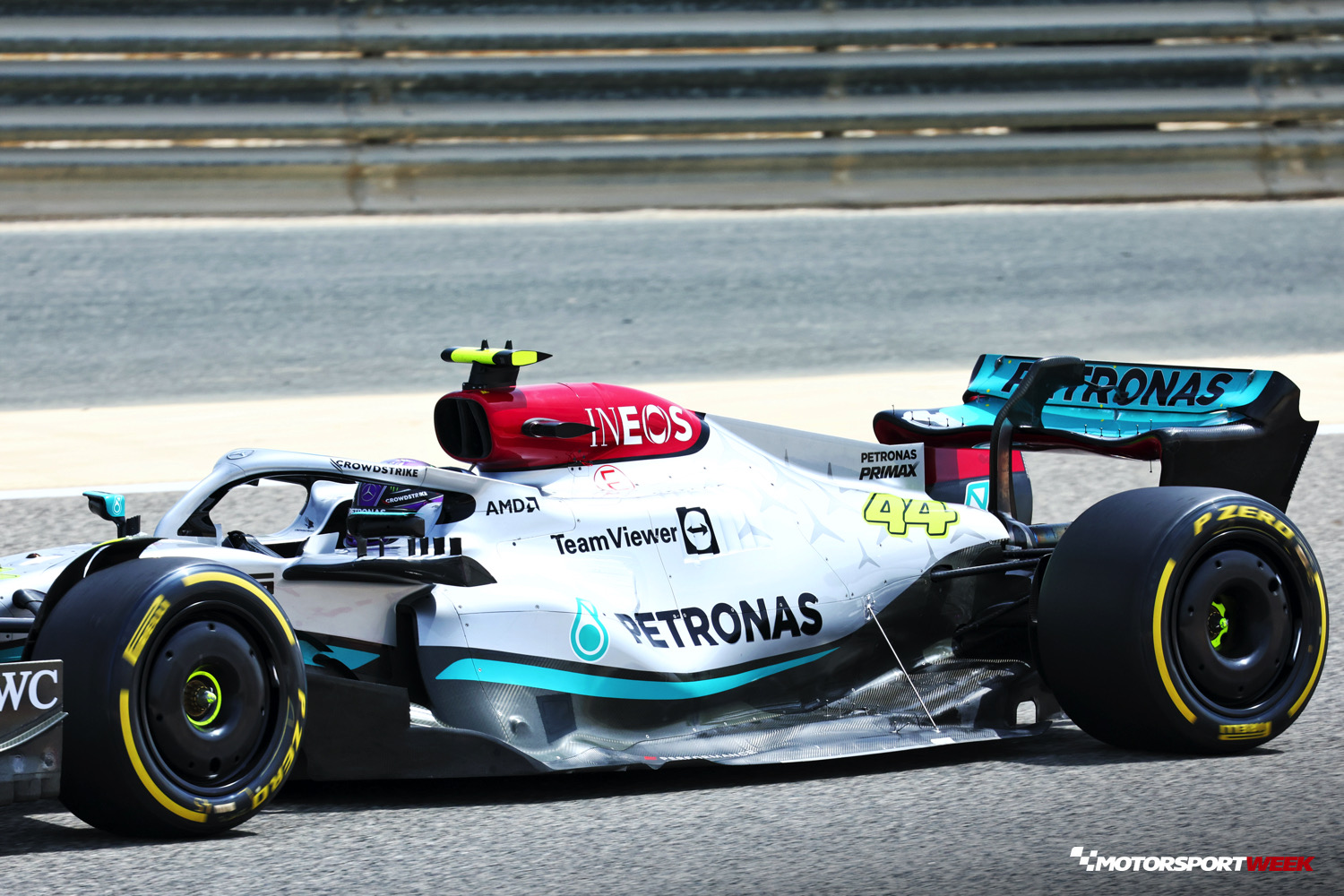 However, we can see the stark difference with the Ferrari philosophy, which does not prefer a wash-down philosophy, but has bodywork that tends to keep the flow high in the direction of the beam wing, despite all the cars from 2022 having a fairly closed rear compared to 2021. This aspect is also guaranteed by the fact that the regulations have allowed the “gills” to be opened (if necessary) for cooling.

The Williams FW44 is the one that has certainly surprised the most in the design of the sidewalls with Mercedes. Team Grove engineers have indeed taken the down-wash concept to the extreme, with the sidepods ending almost immediately, and there’s also an opening inside the radiator slot to bring even more more air at the chute (arrow ). 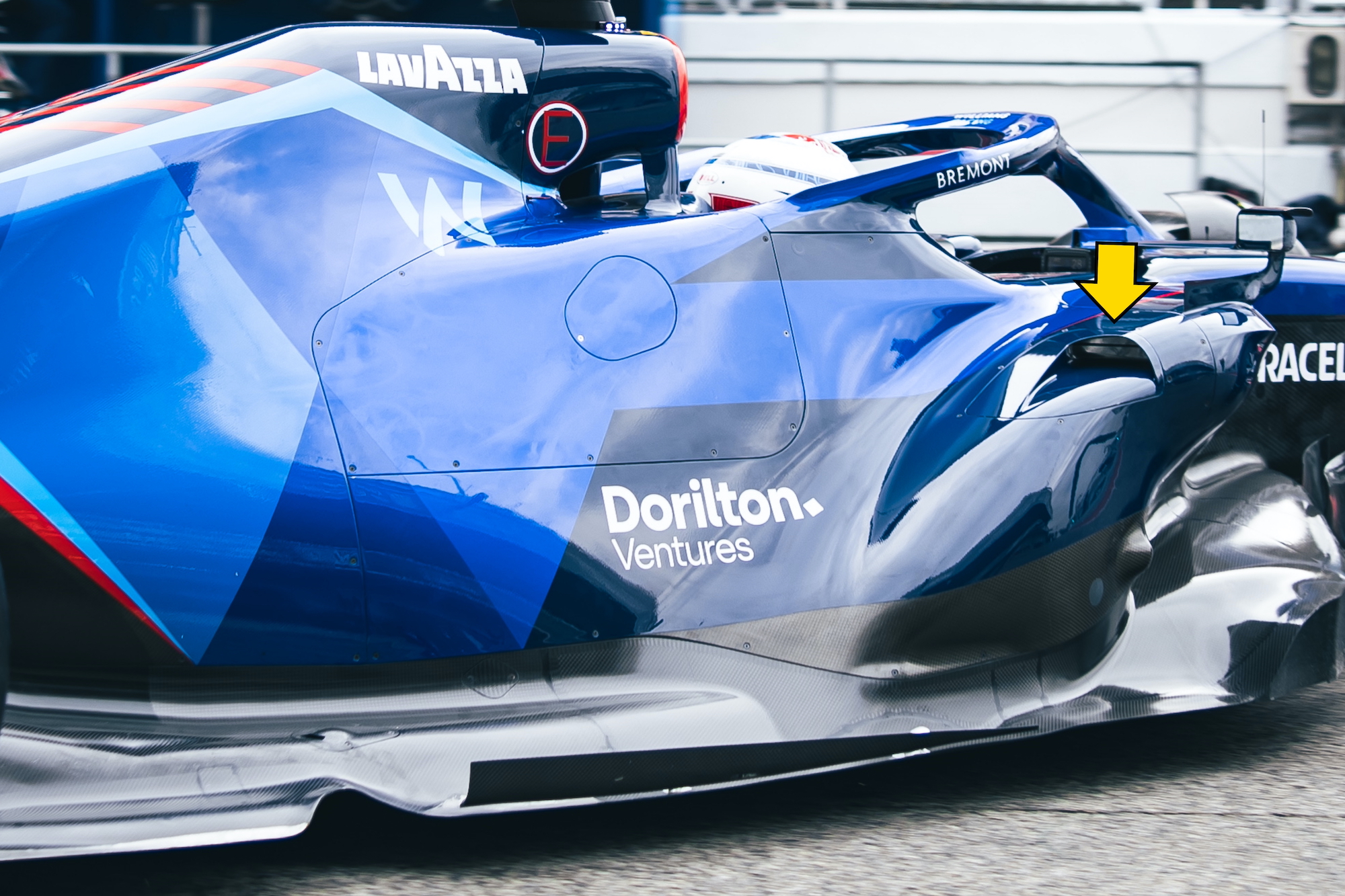 The design chosen by the engineers of the British team was to move some heat exchangers to the upper part of the engine cover, thus freeing up space on the side of the car.

Among these aerodynamic choices described so far, the Red Bull RB18 and the Alpha Tauri are in the middle, with a compromise between high sides and coanda effect.

The single-seater designed by Adrian Newey amazed the competition with the launch of the RB18 in Barcelona, ​​until then well hidden from its opponents with a launch in February with the show car. The Milton Keynes team had wanted to hide their innovations to only show their final shapes during testing, astonishing everyone with the extreme and refined shape of the sidewalls. 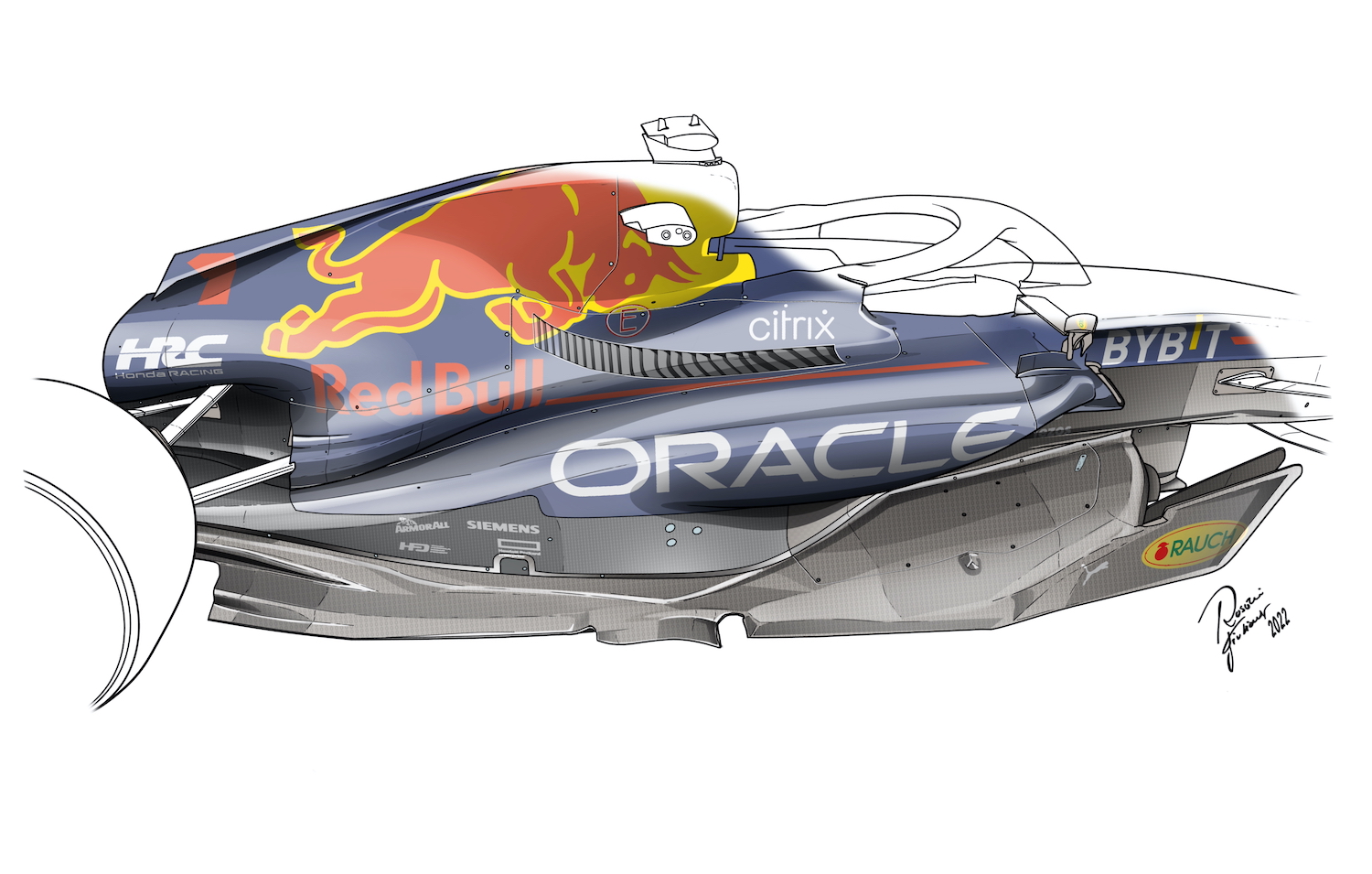 On the final day of testing in Bahrain, Christian Horner’s team debuted the highly anticipated updates that have been talked about for days. The changes that have been seen are not as shocking as those of the Mercedes, but are a development of what had already been done based on the RB18 project.

The pontoons have been dug further into the part below the radiator tray, while at the top edge (where the Oracle sponsor sits) a slide has been formed to create a flow waterfall up the floor. The team is certainly looking to find more downforce with this concept, by increasing the airflow in the upper part of the floor, in order to create a greater pressure difference and therefore more downforce. 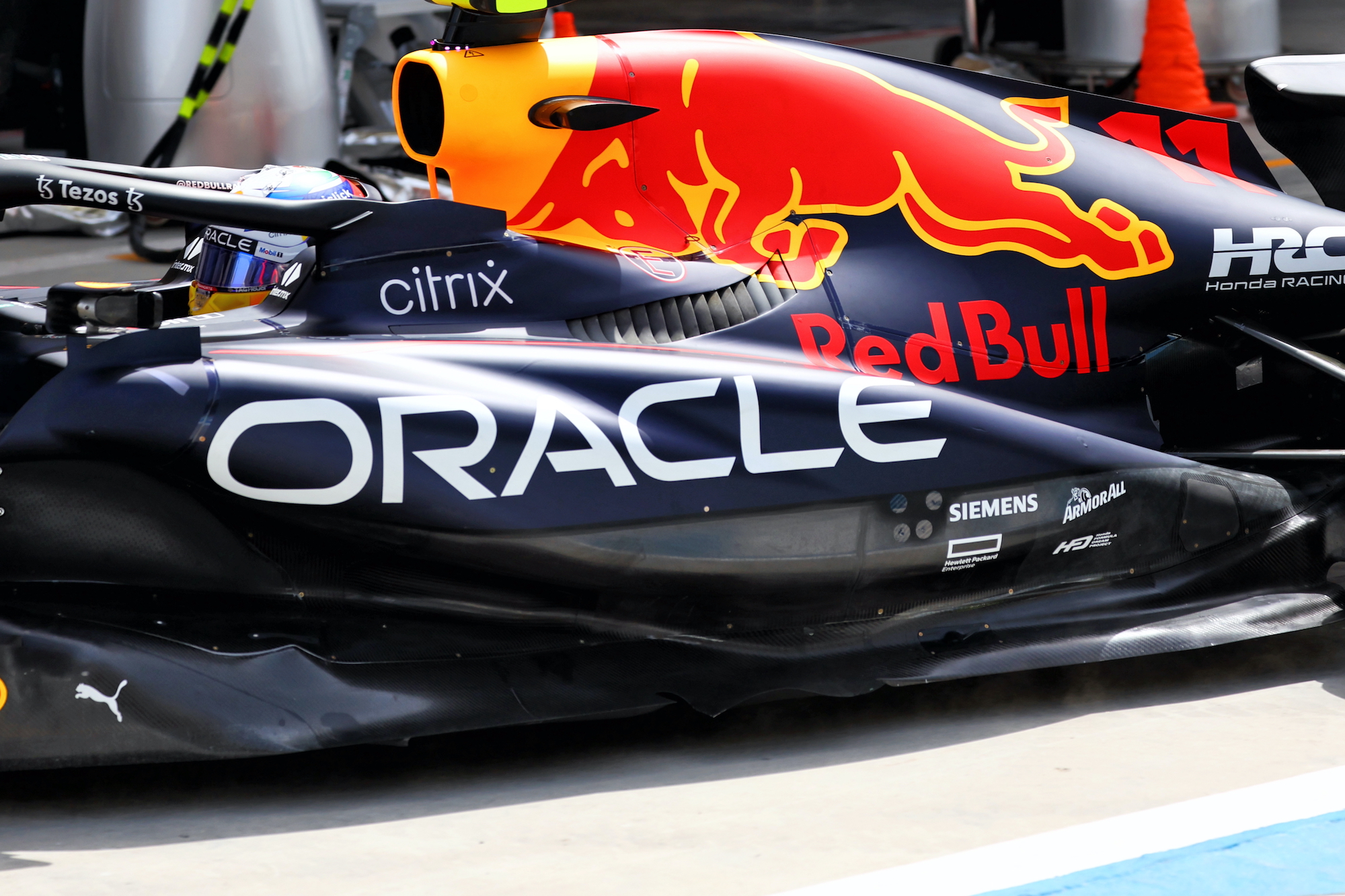 The shape is very hollow in the lower part, partly reminiscent of what was done on the Aston Martin AMR22, to allow a greater and cleaner airflow above the floor. The overall dimensions are concentrated in the front and upper part of the sides of the car, where the air intakes of the radiators have a very advanced shape. The shape remains square up to the rear area, and the search for down-wash only takes place towards the most rearward area, just before the suspension.

Also on the Alpha Tauri there is a similar layout to its big sister, but with a softer line at the top.

All these differences between the single-seaters on the grid will diminish as we find the solution that clearly offers the most advantages. During this season, however, it will be difficult for someone to go and revolutionize their form or copy an opponent, while it is more likely that they will evolve directly on the available draft. This is mainly due to the action of the BoP which limits the hours in the wind tunnel, as well as the budget cap. From 2023, however, it is possible that all these differences will be less marked.

At the moment the winning solution is unclear, but it’s nice to finally see Formula 1 full of technical matters, with each car offering interesting information for analysis. 2022 will finally be able to entertain tech lovers.