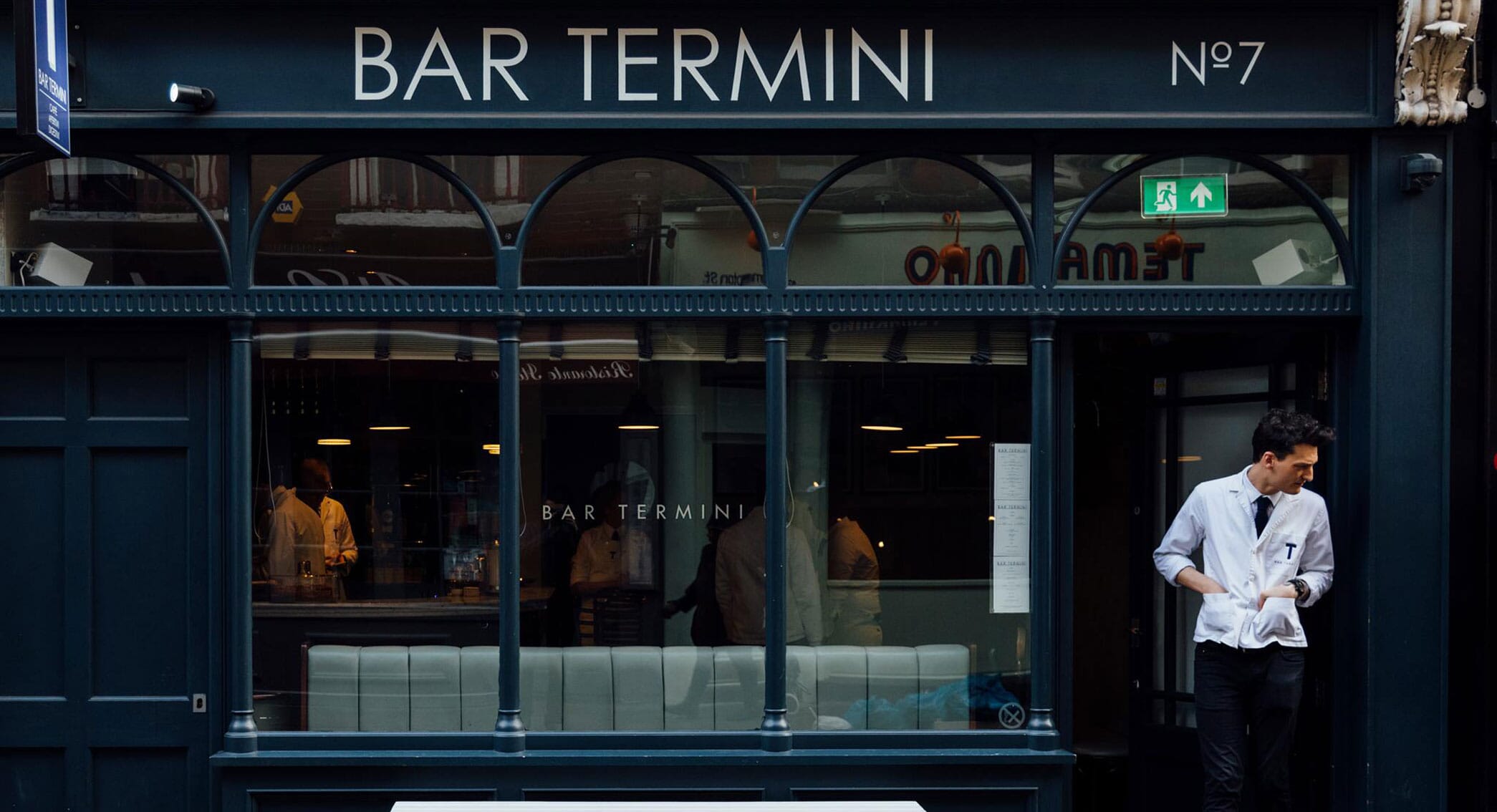 The best cocktail bars in London 2022

James Bond would have a field day. Cocktail lovers in London are spoiled for choice right now. And it’s not just the perfect Martini. From bespoke ingredients in hidden venues to the best classics served in iconic bars, from bottled takeaways to cocktails on tap, there’s an almost bewildering variety of London cocktail bars that mix it up for your attention. So whether you prefer homemade vermouth, smoky South African spices, or simply the best Bloody Mary in Soho served in a bar that thinks it’s Rome, we’ve rounded up 15 picks. Expect the best cocktail bars in London right now.

Winner of several awards, Coupette of Bethnal Green has developed a cult following and rightly so. In a cozy French setting, the emphasis here is on cocktails and nothing else. The glasses are classic, the mixing takes place behind the scenes, the philosophy is all that matters, it’s what you taste, an approach that has won rave reviews. The cocktail menu mixes classic and avant-garde: expect additions such as tangerine leaf, sage, smoke and edible clay. Regulars also suggest booking.

The small but perfectly formed cocktail menu at Old Compton Street’s Termini Bar ranks in the top ten of the World’s 50 Best Bars: Step inside and you’ll begin to see why. The distinctive Italian style is inspired by the bar at Rome’s Termini station, famed cocktail expert Tony Conigliaro ensures your Bellini is as it’s served in Venice, and your Garibaldi or Bloody Mary is exactly as it is. must, no more no less. The cafes are world class.

Three Sheets’ witty name extends to a cocktail menu allowing diners to choose between One Sheet – a fruity French 75 perhaps, Two Sheets – a neat Whiskey Ginger for example, or the full Three Sheets – an Earth Martini with olive oil and beetroot to add a new kick to Bond’s favorite. The venue is an unassuming walk-in with minimalist decor just off Kingsland Road in Hackney, the atmosphere is that of a decidedly laid-back neighborhood bar, the expertise is exemplary.

Choose from locations in Shoreditch or Soho to experience Swift’s adventurous cocktail specialists. While – as their menu points out – the real classics are always available, you can try a summery Kew Gardens, with cucumber, basil, lime and Prosecco gin or a Freja where vodka and vermouth meet lychee and lemon. Equally refreshing, there’s also a more than decent selection of mocktails, like the Tempest, with Darjeeling kombucha, lemon and elderflower.

Satan’s Whiskers looks like an intimidating dive bar in trendy Bethnal Green, but inside it’s a popular neighborhood bar. Beyond the quirky touches – the abundant taxidermy is a trademark, as are the vintage bar signs – there’s serious intent, as you’d expect from a team that previously worked at the Soho Milk and Honey institution. The cocktail menu changes daily with fresh produce front and center, service from staff in shirts and suspenders wins praise from critics.

When only the best will do, put on your rags, top up the credit card and head to the Connaught Bar. Winner – once again – of the best bar in the world, the Connaught Bar is a sybaritic enclave in the famous Connaught Hotel in Mayfair. The decor is inspired by cubism, the cocktail menu elevates the classics with avant-garde edges for the adventurous. Choose a Martini for a full performance from a cart discreetly rolled up to your table. Among the gins available, there is one that is – of course – distilled at the hotel. Unbeatable.

Created by award-winning bartender Ryan Chetiyawardan – known as Mr Lyan – Lyaness occupies the ground floor of the Sea Containers Hotel, with lush contemporary decor – think blue velvet banquettes – overlooking the River Thames. The idea is to bring a cook’s approach to cocktail making, so ingredients are paramount. The changing cocktail menu organizes the offerings according to their exotic ingredients – like blood curacao, green sauce liqueur or fruit furikake. Luxury in every sense of the word.

When it’s time to go old school, there’s no place like Dukes. Ian Fleming drank here, and Dukes Bar is said to be the inspiration for his most famous creation’s preference for “shaken, not stirred”. The first choice therefore has to be a Martini, and there is a wide variety available, mixed next to you from a cart. The location is in St James and the distinctly gentlemen’s club decor reflects this, with velvet armchairs and a wood-panelled bar. The smart casual dress code is exactly what you would expect.

American Bar at the Savoy

A true London classic since 1893, the American Bar is quite simply one of the best cocktail bars in the world, and one of the oldest. Winston Churchill drank here, as did Ernest Hemingway, so you’ll be in good spiritual company. Among his main inventions, the Hanky ​​​​Panky, a cocktail menu mixing classics and unexpected contemporary proposals. The surroundings are precisely as luxuriously traditional as you’d hope, and more. Every real cocktail lover must go there, at least once.

Looking for a unique South African take on cocktails with a railway arch in the ultra-hip district of Peckham? Do. Smokey Kudu is the side project of Restaurant Kudu, serving popular South African cuisine nearby. Smokey Kudu sits below the busy Queens Road, giving the speakeasy feel extra weight. Blend of familiar and unfamiliar cocktails: Amarula, which uses the African marula fruit, makes a regular appearance, as do smoky spices and South African whiskey.

A hugely popular Hoxton mainstay, now with a new branch on Carnaby Street. Dim lighting sets the mood for Prohibition, choose your cocktail according to its place in history from a witty menu, or one of Nightjar’s bespoke adventurous creations, often featuring ingredients manufactured on site. There is also a selection of cocktails to share for your own personal Nightjar cocktail. Be sure to book: Nightjar charms are popular.

Music, not just cocktails, is at the heart of Spiritland, with branches in Kings Cross and the Royal Festival Hall. Choose Kings Cross Spiritland for high-end professional-grade turntables and speakers, not to mention a stellar roster of live performances, the Royal Festival Hall’s new location for mid-century glamour. Both serve twists on the classic cocktails: expect fennel, rooibos, rhubarb, bergamot and moss to make an appearance.

Ranked number two – just below the stellar Connaught Bar – in the latest World’s Best Bars list, Old Street’s Tayēr + Elementary seeks to reinvent the cocktail experience with a two-in-one venue. Elementary is where you’ll come in: instant cocktails on tap, served without fuss and with a relentless focus on what you’re tasting. Tayēr specializes in the theater of experience, with ever more unusual ingredients fused to long-established techniques. Walk-in only.

Tucked away in an austere basement on Hoxton Square, where a window overlooks a bare wall, Happiness Forgets retains its shine for its drinks and service, which have won five-star reviews. Served by candlelight, classic cocktails are the big story here, mixed and served at the bar in front of you, unfussy, unpretentious, just great drinks in a great atmosphere. Book early to avoid queues.

Little Mercies is a Crouch End neighborhood favorite worth traveling for. Exposed brick walls and concrete bar speak of low-light minimalism, boldness reserved for bespoke cocktail ingredients and a distinctive approach to classics. Vermouth is a homemade version, changing with the seasons, your bourbon can be washed down with caramelized white chocolate if you choose its Old Fashioned version. If all that isn’t enough, bottled cocktails are also available to take home.

Follow the cocktails with a meal at one of London’s top restaurants with a view.