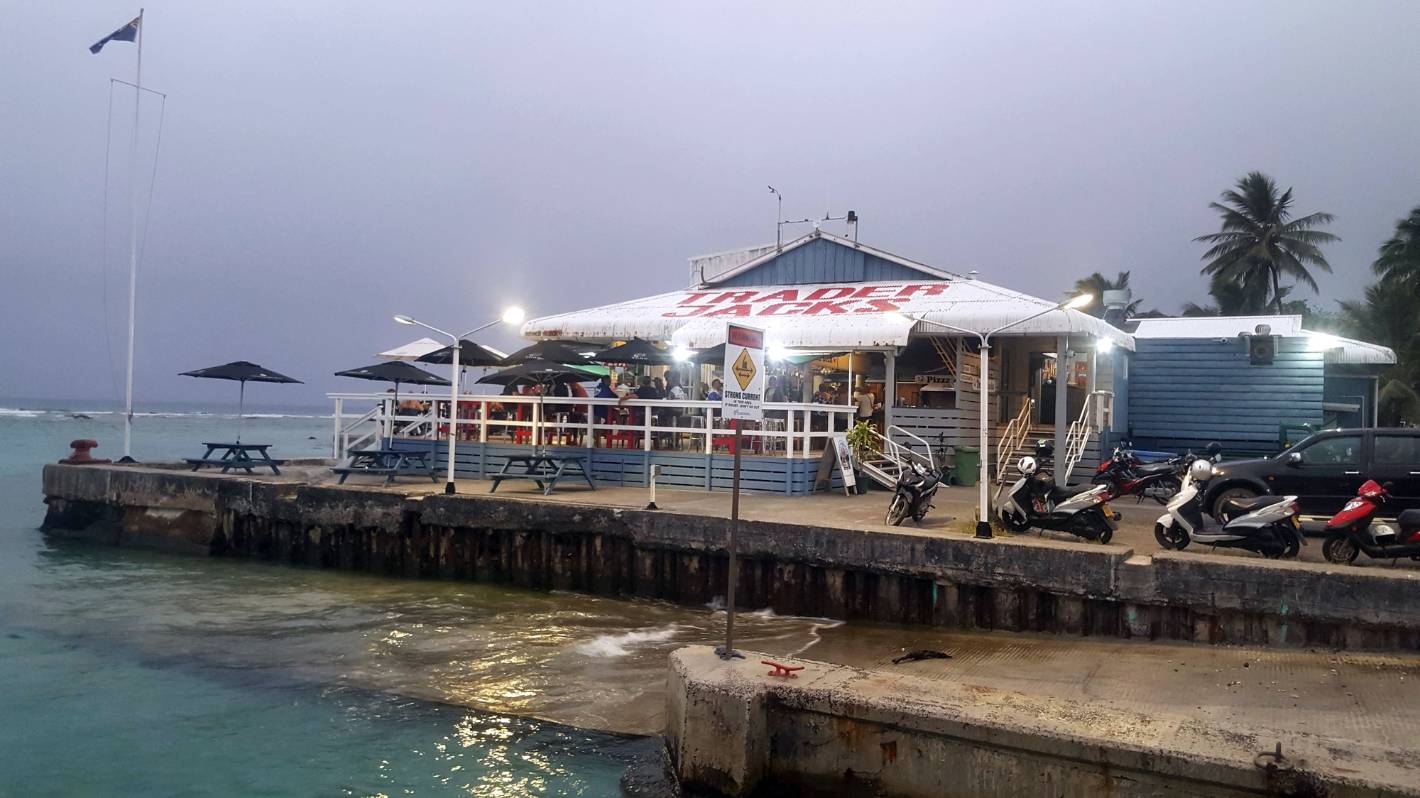 Last call for Trader Jack after ’40 years behind bars’

Trader Jacks on the seafront at Avarua is Rarotonga’s best known bar and restaurant. It’s all thanks to its colorful and often controversial owner, Kiwi-born Jack Cooper, who died early last month at his hillside home overlooking the ancient taro swamp in Avarua.

A few years ago I had the privilege of spending 10 days with the publican, recording his life story in great detail. He delivered his stories with brutal honesty and acerbic wit, drawing on his extensive life experience in the hospitality industry, “40 years behind bars” as he described it.

Born in Wellington on December 8, 1946, Jack was just cut out to run a watering hole in the Pacific. His great-great-grandfather Thomas William Deacon built the original Riverhead Hotel at the head of Waitemata Harbor in 1867, the first riverside taverna to be built in New Zealand.

READ MORE:
* Farewell Spit – a fence too far?
* The fox, the weasel and the two-headed calf: animal stories with the x factor
* Family ties to Abel Tasman grow stronger after seven generations
* On the long, winding trail of a tramping legend

The first time young Jack carried a tray was at the Logan Park Motor Inn in Auckland. He loved the job, but his feet itched. Throwing that in he did a stint on an oil rig in the middle of the Australian Gibson Desert telling me how he remembered that time well because that’s when Hey Jude came out of. He listened to it crackle on the shortwave radio.

Back in New Zealand, he took over the management of the house bar at the South Pacific Hotel, Corner Queen and Customhouse Streets, Auckland.

His hospitality career took him across the North Island, with stays in hotels in Wellington, Whakatane and Hastings, progressing into management.

As he was about to move to the Rotorua International Hotel, he was recruited by Paul Temm, a QC from Auckland who was chairman of The Rarotongan at the time.

This hotel on the south west coast of Rarotonga was built in 1977 but was having a few problems. Jack didn’t know much about the Cook Islands, but he was interested enough in the challenge to take the job. He arrived there in 1983 to take charge of restoring the premises.

The only problem was that the new USA management company was unimpressed with what they thought was a smart young Kiwi who was coming in and interfering with their operation, and they did everything in their power to hinder it. Just eight weeks after arriving, Jack was ousted.

With the bridges to New Zealand burned, Jack was in Raro to stay. An opportunity arose to take over the Vaima restaurant in Vaima’anga on the southern end of the island, in partnership with an old pal from Wellington, Brian Pilkington, who was married to a woman from the Cook Islands.

Jack ran the place very successfully for a few years as he developed a bigger vision of what he wanted to achieve.

As he told me: “There was always something I couldn’t understand about the Cook Islands. It was surrounded by water but there were few water features to sit and drink and watch the ocean, sunrise or sunset, or just gaze at the waves on the reef. It was what tourists wanted, but I felt like no one was providing it.

After much searching and searching, Jack found the perfect plot right on the water’s edge, practically right in the center of town. No one can actually individually own land in the Cooks, you must lease it or have it assigned by family entities.

But that piece of land at the very head of Avarua Harbor was reclaimed, meaning no family had ever owned it, so he negotiated a 60-year lease directly with the Cook Islands Investment Corporation (CIIC ).

Once the lease was closed, he planned his new bar and restaurant meticulously, bringing in all the experts needed to execute his grand plan. All of his planning paid off, with Mainland Brown contractors building the whole place beginning to finish in six months.

Initially, Jack was going to call it Lighters Bar and Restaurant, the name taken from the adjoining offloading facility that used lighters or rowboats to offload cargo from freighters that docked at Avarua Port.

But just six weeks before it opened, the relief service was pulled. All sea cargo unloading was transferred to the port of Avatiu next door.

Suddenly, Jack is faced with the search for a new name for his establishment. General traders are big in the Pacific and a few trader names already existed, the biggest being Trader Joe’s in the US. Vanuatu had Vanuatu Traders, in Rarotonga there was even a Trader Vics, but none of them were bars. So he said to himself: “Trader Jacks, yes why not”.

Trader Jacks opened on schedule on Friday June 6, 1986. Jack started with 10 employees, down from around 54 the business had created before Covid.

From the start, Trader Jacks became a veritable meeting place where all matters, big or small, or social concerns, could be frankly aired. The bar even became jokingly referred to as Cook Island’s ‘Second Parliament’, with the phrase even entering the country’s Hansard when a member stood up to point out Jack’s establishment’s true influence in business. from Rarotongan.

Like many foreigners, Jack felt welcome in Rarotonga, but he also enjoyed being a papa’a, the Cook Islands word for foreigner which literally means “four layers of clothing”, as the missionaries dressed. .

He told me he felt like a white man in heaven, just privileged to be here. His heart just felt like it belonged there. One of his particularly proud moments was when locals started calling him Tiaki Kupa, the transliteration of his name in Cook Islands Maori.

Jack also felt he would have been a rich man had it not been for three cyclones which wiped him out each time, the last one, Meena in February 2005, costing him a good million dollars.

The first to strike was Cyclone Sally in early January 1987, just seven months after opening. The poles and roof survived relatively intact, but everything else was totally destroyed, five-meter waves smashing through the building with tremendous destructive force.

The only thing protecting Trader Jacks had been a flimsy sheet metal sea wall, and everything had been ripped out. The hardwood floor had been pushed up by the sheer hydraulic force of the waves which had undermined the foundation, allowing the floor to crumble like a matchstick, mixing it all up with beach sand, pebbles and coral. Not only was it an absolute total disaster, but it would be the last insurance payout he would ever get, and it took a good year and a half to materialize.

Cyclone Pam in December 1997 was the second major hurricane to hit Trader Jacks. This Cyclone crashed on his birthday, costing him around $80,000 to repair.

The third and most devastating cyclone to hit Traders Jack was Meena in February 2005. Rarotonga had five this season, but Meena was by far the worst, sending waves across Avarua and completely wiping out many businesses. Of Trader Jacks, only a pile of rubble remained and a few posts protruding from the foreshore.

For a few days, I felt like the end had come. But then he had a brilliant idea, converting a 20ft long stainless steel lined shipping container into a side opening bar which he positioned on the waterfront of Avarua Port.

Calling him Jack in the Box was basic but at least he was still waving the flag. He threw a couple sand trucks out front for customers to stand on and he was off.

Slowly he rebuilt the business around this Jack in the Box, eventually selling that container to Aitutaki where it still functions as a bar for the Fishing Club there.

Everyone gathered at Jacks. At least one commentator has attributed the origins of “the Winebox” investigation to this, with Winston Peters being a regular customer at this time.

Jack could never resist the presence of politicians – prime ministers in particular were always fair game for him. One evening he was so critical of Sir Geoffrey Henry that the Cooks’ prime minister threatened to have him expelled from the country. Sir Tom Davis would hold up well, one night replying to him, “How come you are so stupid sometimes Jack.”

Jack’s interactions with customers and friends were well recorded, the practical jokes, ruthless “taking the piss” as he called it, and of course his legendary drinking.

I had to ask him what was the drunkest night he remembered? His response: “Thirty-seven bourbons and cokes, but I still managed to drive home!” Jack liked to shock people, and he could swear too, he called them “sentence boosters”. Bombay Sapphire gin became his favorite drink towards the end.

There have been many defining incidents in his career, such as the crazy naked visit to Trader Jacks one night by All Black Zac Guildford, which made headlines in New Zealand. Then there was the impromptu concert by Neil Finn which almost caused the house to capsize. The Crowded House band members were all vacationing in Rarotonga, and just obliged, Raro style. No wonder he loved the place.

Trader Jacks has provided the venue for so many events, even once hosting a function for Hilary Clinton and her fellow Fifth Fleet visitors. He knew everyone, and everyone knew him at least.

Sure, he had a few Cook Island girlfriends over the years, but it was Rosa Tauia who became his living mainstay until the end. Just as Chris Douglas became his business partner in the fish processing and marinade business they founded in a large tin shed on the side road of Ara Metua.

A man of the caliber and business network that Jack has built is not alone, and no one has appreciated him more than him.

Jack Cooper, proud to have met you, prouder still to record all your stories.

Mayor of Gary orders immediate closure of nightclub where six people were shot, two of whom died | Local News