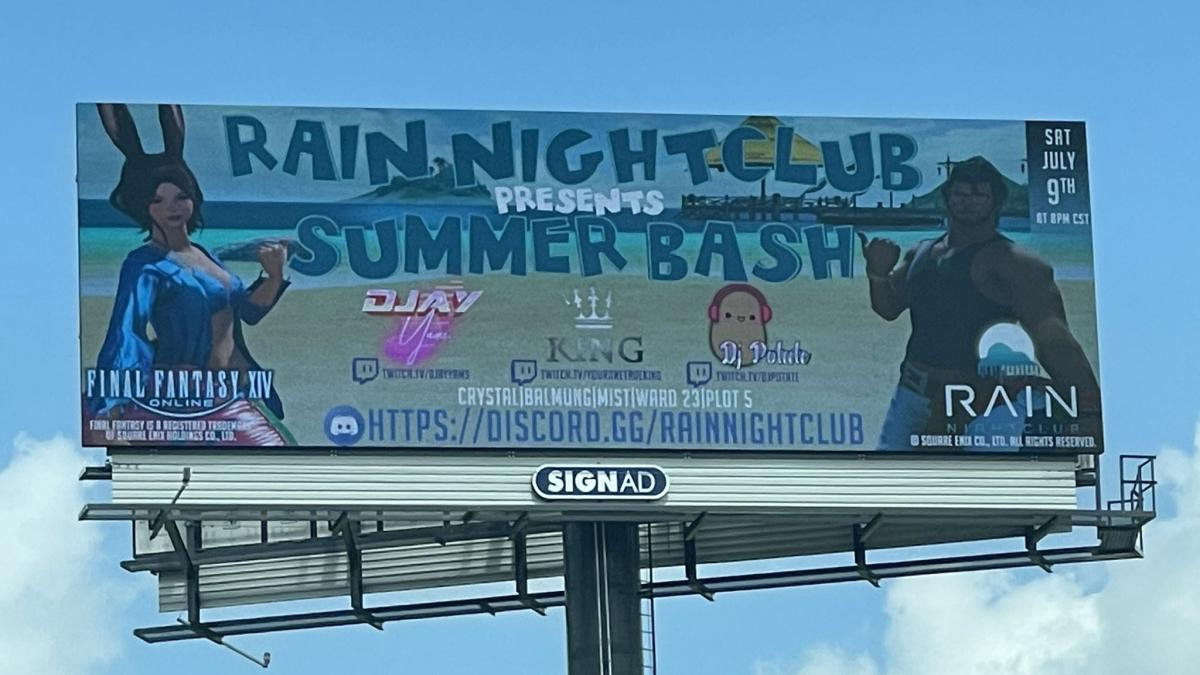 Final Fantasy XIV has become extremely popular over the past few years, and you may see some particularly related billboards.

As a growing and diverse community, Square Enix’s MMORPG has spawned several sub-communities and scenes, and the clubbing scene is among the most active.

If you walk around the streets of Ul’dah and Limsa Lominsa, especially on a weekend night, you will most likely see several players advertising these clubs in the “Shout” chat.

These ads will usually take you to a brightly decorated house in one of the game’s living quarters, where you can socialize, dance, etc., often invited to listen to a live DJ on a Twitch stream.

One of these discos, named “Rain” on the Crystal Datacenter (you can find his website herewith the warning that it includes content that can be considered mildly NSFW) decided to up the ad a notch or ten for its July 7 “Summer Bash” party, allegedly praising four billboards in different places in Texas and California.

You can see a few of them in the tweets below, courtesy of users @NotSoNormalCat, @yuleloggy (originally posted by @DJ_Potate then deleted), and @MassiveMastro. It should be mentioned that these users are not involved in renting or creating the listings, but they just posted the images.

For the moment (to my knowledge), only one place has been identified in Houston, TX.

While those unfamiliar with Final Fantasy XIV might find it cool or just plain funny, the move has drawn ire from a significant number of community members who have responded quite vocally on social media.

The images used for the announcement include user-created character mods and datamined new outfits (likely from the upcoming Moonfire Faire summer event), which is definitely frowned upon by Square Enix. On top of that, the nightclub in question advertises adult-oriented services on its website.

Combined with the use of the official logo and copyright notices, this has a very real possibility of being viewed with hostility by the Japanese publisher, with possibly tangible consequences.

On top of that, members of other in-game sub-communities who like to use mods for quality of life, fashion, in-game photography, role-playing, etc., are concerned that unwanted attention from Square Enix does not have profound consequences on their enjoyment of the game and the use of this software which they normally tend to keep low.

We have contacted the ad provider for final confirmation of the billboards’ authenticity, but have not received a response at this time. We’ll keep you posted in case we hear anything relevant.

Final Fantasy XIV is currently available on PlayStation 4, PS5 and PC. The Endwalker expansion was released a few months ago and you can read our recent review.

You can also read about the planned longer-term changes, including a graphics refresh, and the upcoming 6.2 “Buried Memory” update, which will introduce the “Island Sanctuary” feature and more.

Arrival at the Londoner with Yabu Pushelberg • Hotel Designs