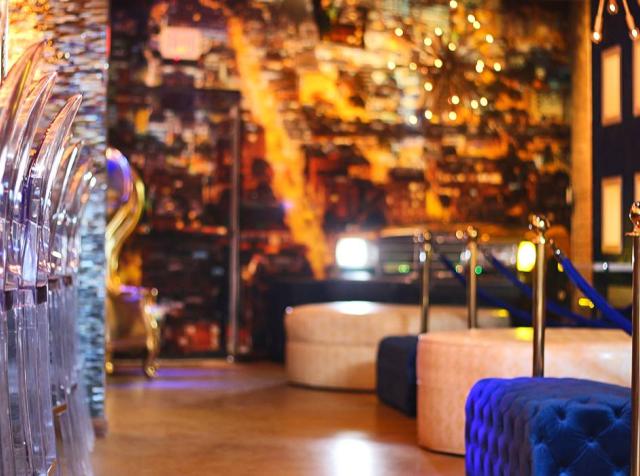 Escobar turns to the franchise as a nightclub concept

The restaurant, which Dillard co-founded with Grammy-winning rapper 2 Chainz, features a nightclub atmosphere with blue couches in the VIP area, gold-stained flooring, and multicolored tiling at the bar. Walk-ins are accepted, but if table and bottle service is desired, reservations are taken for up to three months.

Escobar serves lunch and dinner daily until 10 p.m. with a curated menu by chef Dephon Robinson, who has worked with celebrities such as Queen Latifah and Gabrielle Union. After 10 p.m., the restaurant turns into a lounge and offers drinks and music until 3 a.m.

The first Escobar opened in 2016 and the second unit debuted three years later. There is also a derivative concept, Esco Seafood.

With the right systems now in place, the chain is gearing up for a franchise expansion strategy. FSR recently caught up with Dillard to learn more about Escobar’s growth and where the development will take place.

How was Escobar founded?

The concept was founded between me and my business partner, Grammy-winning rapper 2 Chainz. Pretty much, we just decided we wanted to create something that would be for 25+, that just had a really dope vibe. Like for example, the Mercedes Benz is our DJ booth – a Mercedes-Benz wrapped in gold.

Our food is really good. I wanted to create something that would serve as good late night dining options. Because here in Atlanta we were struggling with that at the time and so this is a restaurant where you can get lamb chops, lobster tails, pasta, different things of that nature up to 2 a.m. And just having not only great food, but great music to go along with it as well as a great vibe and vibe. It was pretty much the basis of our brand.

What made it the right time to get into the franchise?

The way you describe the ambience, the environment and the menu, it seems like a very elaborate concept on all levels. As for the possibility of replicating this atmosphere in several franchise stores, what will be the keys?

The key will be to use the systems that we have put in place. Number one is just going to start with the restaurant, its appearance and decoration. The place must have a terrace. People love terraces, especially when the weather is nice. The colors we used in the core really give it a nice festive feel. So it’s not just a restaurant, but it’s also a lounge. That’s going to be really essential, as well as following the recipes we’ve established for the foods that will be on the menu to make sure everything is consistent and tastes the same.

Could you describe to me some of the characteristics you would look for in a potential franchisee?

So some of our requirements, one, they must have at least $150,000 in liquid capital, two years of tax returns showing they brought in a decent amount of money, and they filed their taxes responsibly , three months of bank statements, a minimum credit score of 600, and the business operator must have four years of experience in hospitality industry. It’s just not an industry you can jump into without any experience. You can certainly own a restaurant without any experience, but whoever will be running this business will definitely need to have some experience in the hospitality industry.

Restaurants are doing well in the big metropolitan city, but they are also doing well in some of these mid-sized cities. I wouldn’t recommend any city that’s just super, super small, four red lights, or anything like that. But those are some of the things we’re looking for. Someone who really has business acumen, who has experience building a team and building a team of good people.

While browsing your website, I saw the house rules you had, which I found quite amusing. Can you share the development of these?

We actually established these house rules during the pandemic. Atlanta was therefore one of the few cities to remain open while many other places were closed. Given that it was, people were really different during the pandemic. I think after being locked up for the time that individuals had to be locked up, they just came out a little crazy to be honest with you. And so we ended up developing these house rules because of that. Thus, all franchisees must also respect these internal rules on their premises. It’s really helped us keep our customers safe as well as maintain the integrity of our restaurant and let people know the rules of each location upfront so they know what to understand and what we will accept and we will not accept. while you frequent our restaurant.

Do you have a timeline for when you would like to start signing franchise agreements and when you think a franchise store could potentially open? Is there a goal you have set for yourself?

So we We have a few deals on the table right now and some people are moving through the process, so hopefully we’ll sign our first franchise deal in the next 30 days.

Looking to the future, what do you think Escobar is capable of achieving?

Within two years, we would like to have at least 10 to 15 locations. That’s really our short-term goal. I really think the sky is the limit. If we stay focused and make sure we have franchisees that are qualified and have that experience in the hospitality industry, I really think that’s something that can go a long way. Like I said, we’re celebrating our sixth anniversary this year in our downtown area, so I don’t see us stopping anytime soon.