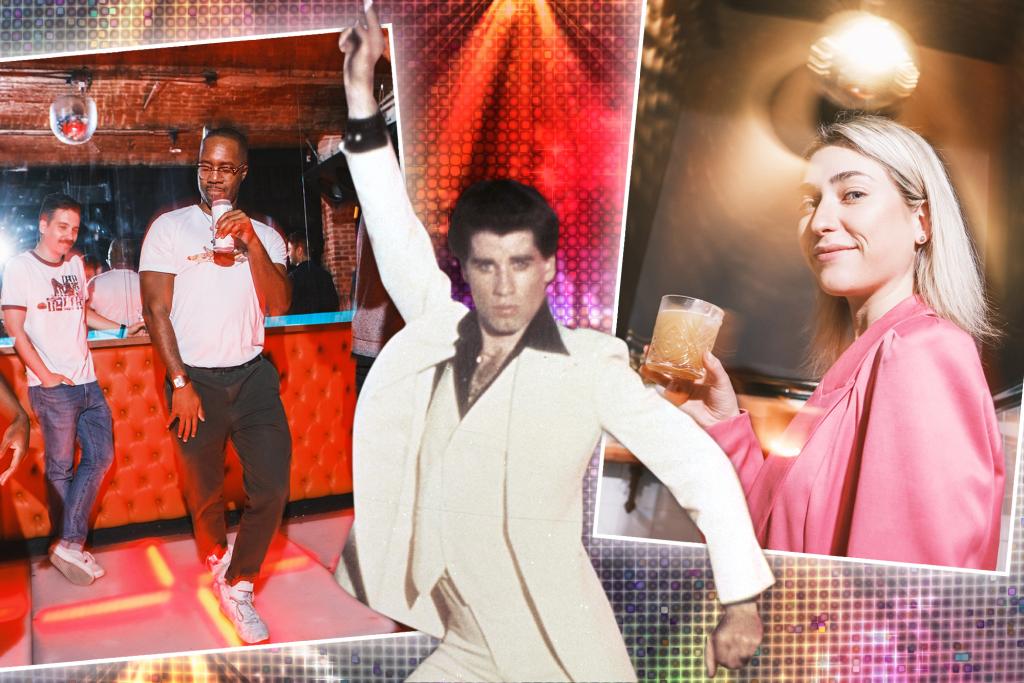 Disco is back at these restaurants, bars and roller rinks

From a Little Italy red sauce restaurant to a Bushwick party spot, local bars and eateries bring the 1970s pizzazz back to nightlife with groovy decor and the classic tunes to match.

“Disco brought everyone together in one room – no matter what you looked like or who you were. Now we see a younger generation embracing the music and good times that our parents grew up with,” Roman Grandinetti, partner at brand new Manero’s on Mulberry, says La Poste.

Check out these seven new spots.

Named for John Travolta’s Tony Manero, the hero of the classic 1977 film “Saturday Night Fever,” this Little Italy red sauce joint is reminiscent of Lenny’s in Brooklyn, immortalized in that film. The restaurant’s tiny restrooms are outfitted with a disco ball and pictures of Travolta, adorned with instructions such as “No smoking cigarettes or that funny electric thing!” You understand?”

The menu features Italian staples and signature drinks like the Grace Jones (a mix of vodka, pepperoncini and spicy oil for $15), described as a “funky take on a dirty martini,” and the Steph Moves to Madison (a mix of vodka, espresso and Sambuca, also for $15). Guests will soon be able to sip cocktails and have fun outside on the restaurant’s private outdoor garden terrace when it opens later this spring with a DJ spinning Studio 54 hits on Saturdays. Guests have been known to throw dance parties in the back room after dinner too.

An unmarked door in a former warehouse leads to Ciao Ciao, a cocktail bar inspired by 1970s Rome that opened in Williamsburg last month. Open Thursday through Sunday, the unofficial Happy Hour begins at 7 p.m., featuring appetizers and savory snacks such as artichoke crostini ($10) and prosciutto and melon ($14). Sip a mix of Negronis and spritzes, like the $15 Disco Spritz (digestive liqueur, elderflower liqueur and lemon soda); and the Ciao Ciao Negroni (strawberry-infused digestive liqueur, Martini Rosso vermouth and gin, also $15).

“We made Ciao Ciao like it was the late 1970s, and you’re walking down the side streets of Trastevere on a nice day, and you come across a hidden gem of a place, and end up spending the night of your life,” Brad Gallagher, co-founder of Freehold Hospitality, who owns Ciao Ciao, says La Poste.

Beyond the bar, the room opens into a nightclub, where the shimmering disco ball twirls and the lights pulse to tunes by Diana Ross and the Bee Gees as the bright, neon-colored dance floor fills up around 10 p.m. There’s a live DJ and mirrored walls too.

Let the good times roll. Beginning June 16, roller skaters will be invited to slide down Central Park’s Wollman Rink. The groovy launch, dubbed DiscOasis, will look like a real disco on wheels, with design by three-time Tony Award nominee David Korins. Theatrical performances, live DJs, artists and other special guests are also on the agenda with hits like “Le Freak” and “Everybody Dance” from iconic funk band Chic. Grammy-winning Nile Rodgers is the official groovemaster.

This 5,000-square-foot, two-level bar and event space opened last month, and while it’s named after the Breeders’ 90s song “No Aloha,” make no mistake, disco is the star of the show. Disco balls spin on both floors. The pink rooms go up to the second level where there is a stage for DJs and live music. The disco fun extends to Sunday, May 29, when the restaurant kicks off its weekly 1970s-themed brunch. The $45 prix-fixe menu includes a choice of entrees, including Cajun Eggs Benedict, pancakes, avocado toast and steak and eggs; and a mimosa, screwdriver or Bloody Mary cocktail per meal. There will be a DJ on hand to bring the funk. Disco-themed outfits are encouraged, but not required.

Boogie down during this Midtown party hyped by the organizers as the “best disco dance party in New York”. Every Friday night since March, the Midtown Casa Events space hosts a “Latin Hustle” dance class starting at 8 p.m., which then turns into a full-blown disco bonanza. Get ready for a sea of ​​glitz, platforms, bell sleeve crop tops and sequins in this Studio 54 inspired night scene. The show comes to life with a real Roller Girl skating on the dance floor and a outfielder who takes the party to new heights. Happy hour also starts at 8 p.m., with 2-for-1 “disco drinks” like classic Tequila Sunrise and Tom Collins. Meanwhile, MixMaster Eddie D. keeps the party going with a sizzling disco soundtrack.

Calling all dancing queens! New York-based ABBA fans can swoop over to West Village nightclub Le Poisson Rouge, which is hosting a touring ABBA event on Saturday, June 4. Give me ! Give me ! (A Man After Midnight)” to “Mamma Mia”. Songs by Cher, the Bee Gees and others will also be featured. This crowd comes dressed to party, so you might stand out if you come in anything other than sequins, bell bottoms, or go-go boots.

Beneath the new restaurant in the East Village, Brasserie Saint Marc is a speakeasy-inspired Saint Downstairs bar, which will open on Friday, May 27, honoring the grit and glamor of St. Mark’s Square. Inspired by Andy Warhol-era parties With a shiny glass disco ball-shaped light fixture and neon lights bouncing off the mirrored walls, the chic space features floral murals reminiscent of Warhol’s iconic prints. From May 31, the dance floor will host rotating DJs who will spin along to hits from the 70s and 80s. Expect cocktails with fun names like Holy Water (a mixture of rum washed down with walnut coconut, lime, milk, tea and agave, for $17) and Redemption (a blend of gin, botanical liqueur, Avèze Gentiane Liqueur, also $17).