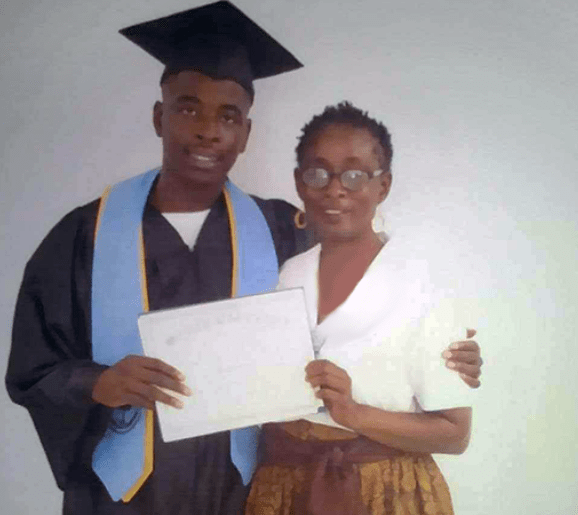 Quantae Priest with a family member during her GED graduation at Lee Correctional Institution in 2017. Courtesy of Quantae Priest.

“Hi Khalil. Guess what? I have been accepted.

“This is good news!” I replied to Quantae Priest, 26, who had called out to me on the playground of our maximum security prison.

But his news was not entirely good. I could tell by his face. We started doing laps around the perimeter of the basketball and handball courts at Lee Correctional Institution in Bishopville, SC

“You already know what’s going on,” he said. “I made connections here. I let my guard down with the guys here. I do not want to leave. But, at the same time, I have to do it.

For a chance at a college degree while incarcerated, Quantae swapped the matching color scheme and individual cells in Lee’s Young Adult Unit for concrete gray quarters the size of a small bathroom. which he now shares with another man at Ridgeland Correctional Institution. .

There he was able to enroll in Claflin University, the only college in our state that currently uses federal Pell grants for prison education. He had to leave behind the supportive community he was part of in Lee.

Although happy for him, I hated the choice Quantae had to make.

Until his transfer in April to Ridgeland, he was part of the Vera Institute of Justice’s Restoring Promise initiative for 18 to 25 year olds. The program matches these young adults with mentors, older men like me, who are serving long sentences. We live with the young men in the unit and teach classes on topics such as effective communication, conflict resolution, and restorative justice.

The young men learn life skills and deal with trauma that many of them faced in their homes and communities before their incarceration.

Most prisons are not built to promote healthy human transformation, let alone to help people pursue higher education. Most prisons do not create an environment conducive to learning.

In the past three decades that I’ve spent in maximum-security institutions, I’ve often had to drown out a cellmate’s radio or uncontrollable snoring with damp toilet paper earplugs just to be able to concentrate on what I was reading.

But, in our unit at Lee, the cell each of us has for ourselves looks like a college dorm, with a desk and a chair for studying. Residents can do their time without being hyper-vigilant to watch their backs.

Community rules, set by us mentors, are meant to keep everyone safe. There is zero tolerance for violence; a person caught with a makeshift rod is immediately removed from the unit.

Lee and Turbeville Correctional Institution are the two state prisons in South Carolina with these dedicated housing units for 18 to 25 year olds. But they only offer GED instruction to those who want to complete high school and vocational training. 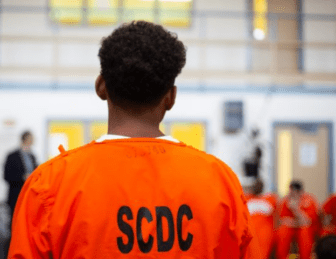 A resident of a young adult housing unit at Lee Correctional Institution in South Carolina, as part of the Restoring Promise initiative. Courtesy of the Vera Justice Institute.

These limited programs – for many young men whom we have taught life skills and strategies to cope with their trauma – will not quench their thirst for higher education.

These limited programs – for many young men whom we have taught life skills and strategies to cope with their trauma – will not quench their thirst for higher education.

Quantae isn’t the only young man in our unit yearning for college and wanting what a degree could do for his life. They share their hopes every Monday and Wednesday when we come together in a community circle to discuss concerns and celebrate victories.

At a recent circle, when I polled young men to see who would be interested in taking college courses, 27 out of 33 of them raised their hands in the air.

The young men in our unit are the same age as traditional university students.

They miss a point in life when most people find out who they are and what they want to do in the future. Research shows that, compared to older adults, young adults lack emotional control and are more likely to act impulsively.

But they are also more receptive to positive interventions, including higher education.

Ridgeland, a medium-security prison, where Quantae went to enroll in Claflin University classes and earn a bachelor’s degree, is part of the Second Chance Pell program. In 2015, under President Obama, this initiative restored need-based federal financial aid to incarcerated students.

I had just finished my own college program when we lost those grants when President Bill Clinton passed tough-on-crime laws in the 1990s.

“If you provide education, almost anyone can change”

At 19, facing a life sentence for murder, I began my long incarceration. Luckily for me, men from a “lifer’s club” took me under their wing. As soon as I entered the establishment, they introduced themselves.

“You are young, you have a life sentence. It makes no sense for you to get caught up in a lot of nonsense. So we’ll help you,” they told me.

Because of this early encouragement, I ended up going straight into the GED program and then taking college courses. Had I chosen otherwise, my journey in prison could have been very different, easily ending up in a gang or spending years in solitary confinement.

Instead, I became a mentor to ambitious young men like Quantae who reminded me of myself at that age.

His decision to transfer demonstrates the sacrifices he was willing to make to obtain an education, building on the communication and self-advocacy skills that we mentors helped him develop.

“If you bring education, if you actually tend to traumatize,” Quantae says, “almost anyone can change in some way.”

The personal change is real, he adds, but the degrees he received from the informal courses he took won’t mean much outside of prison:

“Now I have to get a four-year degree that can really help me when I get home.”

In late April, the federal government added Benedict College of South Carolina, Denmark Technical College, Southern Wesleyan University and Voorhees University to its list of Second Chance Pell sites. Details of the South Carolina Department of Corrections’ agreements with those colleges are being worked out, a department spokesperson said.

Quantae, whose peak release date is 2028, intends to have that bachelor’s degree in hand before returning home. He sees a formal education as crucial to success on the outside and the next step in his personal journey.

“This higher education is my redemption process,” he says. “So when I come out, I’m more equipped to do things to right some of the wrongs I’ve done and make amends for my family, my community, and the world at large.”

Khalil A. Scott is a mentor in the Restoring Promise Unit, an initiative of the Vera Institute of Justice and the MILPA collective, at Lee Correctional Institution in Bishopville, SC During three decades of incarceration, he became a GED tutor, specialist peer support certified and hospice volunteer. National Open Campus reporter Charlotte West contributed reporting for this story.

This article originally appeared in College Inside, a bi-weekly newsletter on the future of post-secondary education in prisons, and is reproduced with permission. Sign up for the College Inside newsletter here.

1 dead in a deadly attack in a nightclub