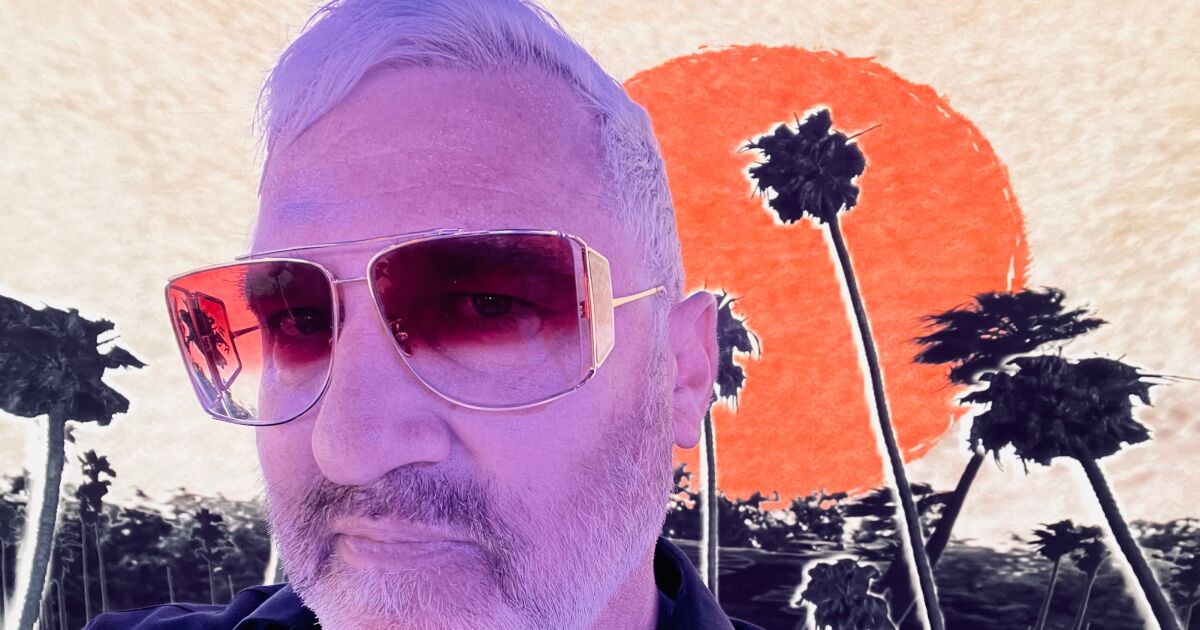 “If you’re into the Rolling Stones, that’s a pittance,” he says, gesturing to his surroundings as he sits in a black leather booth at Atwater Village’s Club Tee Gee – one of three places he owns in Los Angeles. – a recent afternoon. “If you’re one of the Afghan Whigs,” he adds with a smile, “you’re excited.”

Dulli, 57, has been a member of the Afghan Whigs — in fact since 1986, when he formed the shadowy grunge soul group in Cincinnati, not far from his hometown of Hamilton, Ohio. Built around Dulli’s tortured moan, the band found alt-rock success in the post-Nirvana ’90s with albums like “Gentlemen,” on which the frontman dissected a toxic relationship in brutally unforgiving detail; MTV’s adoption of the LP’s single, “Debonair”, even led to Dulli being cast as the voice of John Lennon (alongside Dave Pirner’s Paul McCartney and Dave Grohl’s Ringo Starr) in the biopic “Backbeat”. of the Beatles debut in 1994.

Decades later, after a breakup and reunion and a number of personnel changes, the Whigs are still around. On Friday, the band will release their ninth studio album, “How Do You Burn?”, and play the first date of a US tour that will keep Dulli and his friends on the road until mid-October.

“We just did three weeks in Europe, and the show in Prague – I mean, that’s why I always do it,” says the singer, who beyond the Afghan Whigs has done solo records and performed with the Twilight Singers and as half of the Gutter Twins with Mark Lanegan. “Absolute emotional ecstasy.”

As much as music means to Dulli, he spends much of his time these days minding his business: Club Tee Gee, the dive-y Footsie’s in Cypress Park and the Short Stop near Dodger Stadium, as well than two other bars he co-owns in New Orleans, where Dulli lives when not in Los Angeles. The Short Stop was his first investment; he paid $15,000 for his initial stake in 2000 as the original incarnation of the Whigs began to crumble.

Still, Tee Gee, who he’s had for about four years, is his favorite, he says. (For one, it’s the closest to his house.) Dressed in a golf shirt and basketball shorts, his once inky hair turned snow white, Dulli eagerly points out some decor elements he changed when he bought the bar from the family of one of the men who opened it in 1946. His business partners at Tee Gee are “an ex-marketing manager with a specialization in finance, a lawyer and a CPA,” he says. Laughing, he adds, “All the s—I’m not.”

Dulli, who acts like a minor character in a Martin Scorsese film, knew about bars long before he started playing them with the Afghan Whigs. Growing up, he had two uncles who owned joints in Hamilton where he hung out and played shuffleboard. “It was a familiar setting,” he says now. “And I understood that my two uncles were doing well.”

Indeed, despite his various indulgences as a young rock star – and with crucial advice from a business leader “who was like, ‘Capital gains – follow my lead'” – Dulli was smart with the money he he started winning when the Whigs took off. “It was real estate immediately,” he says. “I bought my first house at 27, then another at 29.”

When asked if LA or New Orleans is the biggest drinking city, Dulli said New Orleans is “a more consistent drinking city”, not least because bars can operate there 24 hours a day. 24. “But I’ve learned that nothing good ever happens at 5 a.m., unless it’s Mardi Gras,” he says. “I’m not staying open for five sketchy mothers – just tweaking and trying to get their heart rate down.”

Dulli’s new music still exudes a dreary atmosphere in the wee hours of the morning: ‘The Getaway’ is told by someone ‘waiting for the night while I destroy the day’, while the ‘A Line of Shots’ singer meditates “a simple lie to invoke your sympathy. Throughout “How Do You Burn?” – on which Dulli’s collaborators include founding Whigs bassist John Curley as well as members of The Raconteurs and Blind Melon – the band combines the genre sharp guitars and throbbing R&B grooves that Dulli had loved since he was a kid obsessed with Led Zeppelin and Motown, Aerosmith and Ohio gamers.

Quitting after touring behind 1998’s ‘1965’ album – Dulli was ‘sort of done with the music’ and briefly manned the bar at the Short Stop before turning to the Twilight Singers and the Gutters Twins – the Afghan Whigs came together in 2012, first with founding guitarist Rick McCollum on board. But McCollum didn’t last long: “I think he was just settling into what his life was like,” Dulli says. “He was like an alien to me.” The band released two albums, 2014’s ‘Do to the Beast’ and 2017’s ‘In Spades’, with guitarist Dave Rosser, who died of colon cancer shortly after the latter’s release.

Dulli conducted remote recording sessions for “How Do You Burn?” as his bandmates were scattered across the country during the COVID pandemic. “That first song represents four people in three states,” he says of the LP’s opener, “I’ll Make You See God.” But it doesn’t sound put together at all; Dulli, a noted control freak, believes that other players actually felt more invested in the music because they were creating their games under his watchful eye.

“You can’t be Paul McCartney all the time,” he says with a shrug.

His vocals — snarling, pectoral, slightly haunting — are particularly strong, which he attributes in part to his work with Lanegan, the gravelly-voiced former Screaming Trees frontman who had perfect pitch, according to Dulli. “He’s been ravaged but still in the key,” he says of Lanegan’s signature croak. In her own voice, Dulli says, “In all modesty, I think I sound a lot better now than I used to.” The worst singing he has ever done, in his opinion, is on the album widely regarded as his best.

“I did almost all the singing on ‘Gentleman’ in about three days, and I was moving at the time,” he says. “Stay up all night, do things that are not good for your throat. We take his point, but could it also be the case that – on an album about desperate people in dire straits – it’s precisely this tattered quality that makes the performance?

“If you like Method singing,” he says, “I guess that’s a masterclass.”

Dulli, who is never married and has no children, is candid about his history of substance abuse. “When I was young, I read Creem magazine, especially whenever they talked to Keith Richards,” he says. “I loved Keith Richards. And I was like, I can’t wait to do drugs. Drugs sound like fun. I’m gonna do them all. And I did.” By the end of the 1990s, he had entered a “self-destruction phase”, as he puts it; he had become “nasty and unstable”, to the point that “even my strongest supporters would tell me, ‘You suck.’ So I got out of that phase, and I never went back.

Did his ability to do so surprise him?

“I have an iron will,” he says. “When I make up my mind, it’s done.” These days, he drinks tequila, mezcal and gin; he liked bourbon, although he had lost his taste for “brown downers”.

Dulli says losing Lanegan and Rosser — along with his friend Shawn Smith, who played with the Twilight Singers, and his former booking agent, Steve Strange — made him reflect on his own mortality. “I am entering the autumn of my days,” he says. Of Lanegan’s death in February, the cause of which has not been publicly disclosed, Dulli says he knows nothing beyond the fact that Lanegan’s health was severely damaged by a bout with COVID last year. .

Prior to that, Dulli says, Lanegan had been “bathed in some conspiracy theories” regarding the pandemic — “classic tinfoil hat stuff about vaccines and Bill Gates. I was like, ‘Man, come on.’ But I think he got past that. Dulli spoke with Lanegan on the phone a week before his death, he said, “and he seemed fine to me then.”

The spread of COVID misinformation is just one aspect of a political climate that Dulli jokes has him wondering “when Ashton Kutcher is going to come out and tell us we’ve all been punks.” This summer, the singer returned to Ohio to visit his mother. “I’m driving through my old town and I see all these flags with the name of someone who is no longer president,” he says. “Why are you flying on this flag? It is a cult flag. Is it Jonestown?

He shakes his head as he continues, “You know, when I was young, you could get in on someone who didn’t agree with you and then eat ice cream afterwards.” Now, my mother, I want to kill you.

When asked if he supported Karen Bass or Rick Caruso in the race for mayor of Los Angeles, Dulli replied, “I’m just a socialist, so I’ll just put that there and you can probably answer. your own question.”

Is there a tension between being a socialist and owning a small business?

“A little,” he said, laughing. “My partners sometimes hinder my socialism. They’re like, ‘Now, Greg…’”